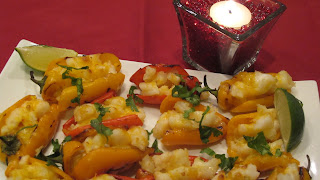 The Bake picked up some stuffed peppers from a local Mexican restaurant that is very popular. I don't have their recipe but this is my attempt to recreate these addictive little guys. Soon as I took this photo, the Bake was ready for another round of them.
12 little peppers (yellow) triangle cut at stem with a slit down the front to take out ribs and seeds.
24 medium shrimp (uncooked)
1 tsp olive oil
2 garlic cloves, sliced
Alfie's seasoning
1/2 lime, zest
1/2 cup Mexican blend cheese, grated (or Cheddar)
soy sauce
mayo
Grill the peppers until lightly charred and cooked, then set aside.
Preheat oven to 375F.
Toss shrimp with olive oil, garlic, seasoning and put on a lined baking sheet. Bake until no longer pink. Toss with lime zest. Slice shrimp and put in a bowl and mix with cheese. Stuff pepper with shrimp mixture and broil until lightly browned on top.
Serve with sliced lime, and cilantro, if desired. Soy sauce and mayo on the side. (I know it sounds odd but so tasty!)